Who we are
Our goal
Our path
Our management

FROM HOBBY TO BIG VENTURE 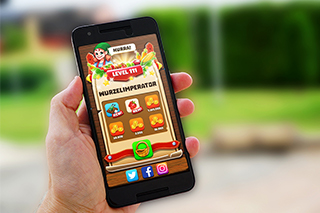 The first playable versions of browser games surfaced at the beginning of the new millennium. Several online communities evolved, forum administrators took up their work and different methods and models of monetarization were implemented into the hitherto free-of-charge games. The free-to-play business model was born.

Kapitalism, which was programmed by Klaus Schmitt in his living room in 2003, was one of the first browser-based economy simulations. Marika Schmitt, who is today part of the company’s management, brought in fresh ideas and game content. In addition, she attended to the increasingly growing game community’s communication. What started out as a hobby project in a living room developed into a firm business model over the course of the next two years, until UpSim was founded in 2006.

Additional projects were taken on, numerous employees were hired, and the living room project was moved to a proper office. Among other games, the economy simulation Kapilands was developed there, and was awarded the title “Browser Game of the Year” in 2006. One year later, the company was rebranded “Upjers GmbH & Co. KG”. Meanwhile, it has become the upjers GmbH.

Browser games have taken the internet by storm. Several games from the industry’s early days have long since reached cult status, and since then, the industry has become more professional. Long-term planning and sustainable concepts have become the most important factors for success, besides creativity and technological innovation. Nowadays, app games are an important addition to the gaming market.

In 2008, our garden simulation “Molehill Empire” brought us our greatest national breakthrough. “My Free Farm” was proclaimed “Best Casual Game” in 2009 and helped upjers gain recognition far beyond Germany’s borders.

Within just a few years, the original workforce of three employees has grown to its current staff of over 100 employees. At our headquarters in Bamberg, Germany, our teams take oversee the development, marketing and support of our browser games and apps. Our games are being played in more than 200 countries worldwide. Meanwhile, upjers browser games are available in over 20 different language versions – our mobile games are likewise being increasingly internationalized.